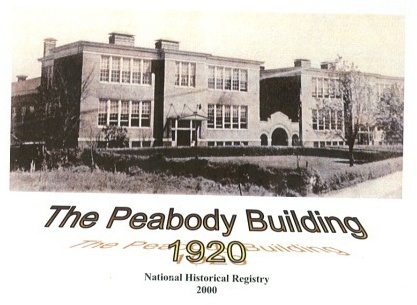 Out of the Old African Church located on Harrison Street, Peabody High School was first developed in January 1870. In 1873 the Old African Church became inadequate and the second step in the development of the High School was taken. The Board of Education purchased a plot of land on the corner or Harrison and Fillmore Streets for the erection of a new high school. The George Peabody Fund and other sources received funds from a grant of $10,000.00 from the city supplement. The construction of the building was completed in 1874 at a cost of $18,270.00 and the twelve-room brick structure was officially named Peabody School in honor of the Massachusetts Philanthropist George Peabody.Peabody School was the first public high school established for Negroes in the Commonwealth of Virginia.The first principal was R. E. Hardaway, who was assisted by four teachers. The school accommodated both high school and elementary students. Hardaway served as principal until the middle of the 1875-1876 session. P. H. Lightfoot succeeded him as principal for one year and resigned in 1877. Duncan M. Brown became the third principal of the high school. He began his first public work in Petersburg as principal in 1878 and remained until 1881. E. H. Hinton, who served for approximately one year as principal of Peabody, succeeded Brown in 1881. In October 1882, G. C. Scott became principal and served only two months. All principals, up until this time, were white because it was the general practice for them to be hired and serve in such positions.

December 1882, Alfred Pryor, the first Negro to be appointed as acting principal of any Negro School in the City of Petersburg, succeeded Scott. At the beginning of the following term, Pryor was appointed principal of Peabody High School. Pryor resigned his position as principal at the end of the school term 1883- 1884.

In 1884, William H. Hamlin was named principal of Peabody High School. He was a native of Petersburg and a graduate of Peabody. Hamlin began his teaching career in the Petersburg Public Schools first at the Jones Street School and later as principal at the Peabody School. His educational career was cut short by his early death in 1892. Under his administration, the student enrollment increased from 25 in 1883 to 43 in 1886.

The next 46 years of the development of Peabody High School was under the dedicated leadership of James Shields who became the guiding spirit of that period in the Petersburg community. From 1889 until his retirement in 1935, he served as principal of The Peabody School. The high school then occupied one room that housed the student body of 50 pupils in the original Peabody building of 12 rooms on Fillmore Street. Despite the effort of Shields and the advances made in education during his tenure, the physical state of the school continued to deteriorate.

In October 1915, a proposal for the relocation of the Peabody School, to be situated on the Bulifint property of Jones Street, was introduced. The Board further proposed that two buildings be constructed, one for the high school and one for the elementary school.

The spirit of the times changed following World War I and demanded education for living as well as for livelihood. The idea brought a change in the Peabody-Williams curriculum, which extended from a three-year course of study to four years. Peabody High School appeared on the list of standard three-year high schools in 1917 and was placed on the list of accredited four-year high schools for the session 1921-1922. The student enrollment increased from fifty high school students in 1889 to 409 in 1935. The number of high school teachers increased from one in 1889 to forty-three in 1935. Shields’ forty-six years as principal rated him high among teachers and principals for length of service. Shields retired from active work at the close of the school year 1934-1935. Under his administration, Peabody High School, the first public high school for Negroes in the state, developed into a standard four-year high school and prepared Negro elementary schools for high schools.

Donald C. Wingo, the tenth principal of Peabody High School, succeeded Seay in September 1938. The same year, Eunice Byas of Petersburg, was appointed assistant principal and the next year Clinton B. Taylor replaced Byas. During Wingo’s service as principal of Peabody-Williams, the school functioned as a junior and senior high school.

Abraham M. Walker was appointed principal of Peabody High School in 1941. During Walker’s 11-year tenure, Clinton B. Taylor and Clyde S. Scott served as assistant principals and the fourth stage in the development of Peabody High School began with the purchase of three parcels of land in 1948 and 1950 within the boundaries of Wesley, Jones and Federal Streets. The new school was officially named Peabody High School by the School Board. The school opened in September 1951, with 524 students, one principal, one assistant principal, and twenty-nine teachers. The school offered four years of high school work, grades eight through eleven.

During Walker’s tenure, the student enrollment increased from 281 in 1941 to 595 in 1952 and the number of teachers increased from fifteen in 1941 to twenty-nine in 1952. After more than a decade of service to Peabody High School, Walker passed away suddenly. One year after the new school opened, he was remembered for his tolerance, calmness, patience, logic, and wise counsel.

After Walker’s death, September 25, 1952, Clyde Swanson Scott was named the twelfth principal of Peabody High School and Richard Pegram was appointed assistant principal. During Scott’s administration at Peabody High School, an adult night-school program was started which offered academic courses for credit. A summer school program was begun in June 1952 with the appointment of Paige T. Curl serving as the full-time summer school principal.

Two years after Scott was appointed principal of Peabody High School, a striking event occurred that later affected not only this school, but schools throughout the nation. This event was the historic decision of the United States Supreme Court to outlaw school segregation. On May 17, 1954, the Supreme Court unanimously agreed that in the field of public education, the doctrine of “separate but equal has no place.

Separate educational facilities are inherently unequal. Therefore, the court announced in 1955 a general formula for the transition. “A prompt and reasonable start had to be made towards the removal of racial distinction in assigning students in schools. The transition was to be carried out with all deliberate speed.” No effort was made to desegregate Peabody High School at this time. In 1961, Scott resigned because of illness and succumbed on June 22, 1962 without seeing the 1954 Supreme Court decision implemented.

During Rainey’s tenure, numerous changes took place at Peabody High School. First, the school building was enlarged to accommodate an increased school population. Second, in 1965, the curriculum was changed to make teaching more relevant and functional. Third, a series of cultural programs were initiated for the enrichment of the students’ cultural life. Fourth, students participated in the National Merit Scholarship Program. Fifth, under the National Defense Act, students received benefits from Federal Grants.

The Petersburg School Board officially established by resolution that the eighth and ninth grades be headquartered in the building on West Washington Street known as Petersburg High School.