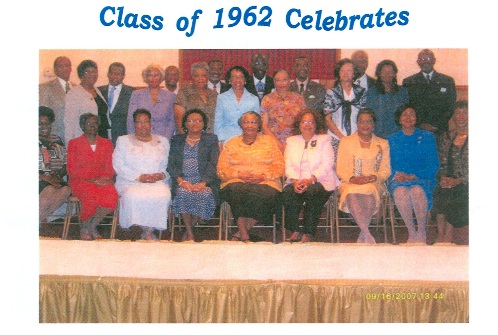 Friday Night – Meet and Greet – September 14, 2007:   Approximately 32 classmates, their spouses and friends arrived with great excitement and anticipation of meeting, greeting, and reminiscing with classmates in the extended wing of our old Alma Mater. Each classmate registered and received a gift bag with lots of memorabilia to cherish from this reunion.

The school’s new principal, Mr. Scarborough, sent regrets that he could not be there to welcome us!! Instead, we were welcomed by Janice Mann, a teacher at Peabody and a graduate in the class of 1970. Janice is also the sister of class co-chairperson Virginia Mann. Janice was also gracious enough to take group pictures of the class in the auditorium.

Janice gave a brief tour of the recently renovated school auditorium and computer rooms. A walk down the main hallway led us to graduation class pictures hanging on each side of the hallway from 1951 to 1966. The class members were very excited seeing pictures of former students who walked the halls before, during, and after their days at Peabody High. We saw digital cameras, 35mm and telephone cameras flashing from every direction!! That old saying “One picture is worth a thousand words” could not be truer when one observed the facial expressions and overheard the many “oohs and ahs” coming from the classmates.

Oh, by the way, I must remind you that the class of ’62 contributed $500 towards the renovation of the auditorium in 2000. We are planning to make another contribution in the very near future.

I can’t forget the delicious food prepared by Food Lion Deli. Everything was so tasty, and we had enough for everyone! Plans to tour Old Towne Petersburg were hampered by the heavy downpours of rain after the gathering. However, some of the classmates braved the weather and made a few stops in Old Towne.

Saturday, September 15, 2007:   A tour of the Pocahontas Black History Museum located on Pocahontas Island was conducted by owner. Richard Stewart, a member of the class of ’61. According to Richard, he was supposed to graduate with the class of ’62, but because of a certain English teacher, he had to stay behind and attend summer school. Richard, we still love you anyhow! J Anyone who has not visited the museum should make a special effort to do so. Richard is a “walking encyclopedia” giving the history of Pocahontas Island, slavery and freed blacks in the Petersburg area as well as throughout the state. It is a tour well worth your time!